Join our Veterans Business Council with their breakfast on Thursday, October 29th at 9am. This year, we will be hosting via Zoom, so come with your coffee and favorite morning meal!  All proceeds from this event will be going towards the VBC to provide their support of local veterans.

Our speaker for this breakfast will be Commander Phillip Boice, Commanding Officer, NSA Saratoga Springs. He will be discussing the economic impact the Navy has on Saratoga County.

Commander Phillip E. Boice enlisted in the Navy from Estes Park, CO and served as an Electronic Warfare Technician from 1990-1995. As an EW, he served on USS HEWITT (DD 966) in Yokosuka, Japan and USS JARETT (FFG 33) in San Diego, CA before attending the University of Colorado-Boulder where he earned a Bachelor of Arts Degree in Psychology.

He received his Commission in May of 2001 as a Surface Warfare Officer and attended the Division Officer Couse in September 2001.

In February 2002, CDR Boice reported to USS PETERSON (DD 969) in Norfolk, VA while he was deployed to the Arabian Gulf as a first deployer after 9/11. He served as the Anti-Submarine Warfare Officer where he earned his Surface Warfare Officer qualification.

After decommissioning USS PETERSON, he reported to USS ELROD (FFG 55) as Auxiliaries Officer in October 2002 and conducted a Standing Naval Forces Mediterranean deployment, supporting the 2004 Olympics in Athens, Greece. In November 2004, CDR Boice reported to the Surface Warfare Officers School Command in Newport, RI as a Division Officer Course Instructor. While serving as a Navigation, Seamanship and Shiphandling instructor, he was also the project lead for the Division Officer Course Computer-Based Training Version 2 and the contractor developed Version 3. Additionally, he completed a Master of Science Degree in Management at Salve Regina University and Joint Professional Military Education 1 through the Naval War College.

In March 2008, CDR Boice reported to USS O’KANE (DDG 77) in Pearl Harbor, HI as Chief Engineer. While on O’KANE, he completed multiple deployments to the West Pacific and Arabian Gulf. In November 2009, he was ordered to USS LAKE ERIE (CG 70) as Chief Engineer, where he completed a Western Pacific deployment as well as several AEGIS Ballistic Missile Defense exercises and test shots.

PCS orders brought him to Cheyenne Mountain Air Force Station, Colorado in September 2013 as part of USSTRATCOM’s Missile Warning Center, where he served as a Crew Commander, the J7 Chief of Training and J3 Chief of Operations from September 2013-May 2017.

CDR Boice completed a 7-month Individual Augmentee assignment as Officer in Charge of a Military Detachment on USNS YUMA deployed to the Sixth Fleet AOR in April 2019. 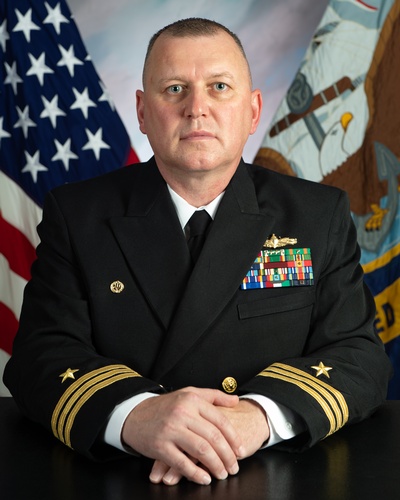 Zoom
Link will be in Confirmation Email

Google Yahoo iCal (Outlook, Apple, or other)
Scroll To Top